This post is not about the the PC/Baofeng cable that is used for programming the radio. If you want one of those, then try Amazon.

This is about connecting the audio streams twixt the radio and a PC.

The basic mission is to take the Soundcard in/out from a PC and connect it to the Kenwood K2 connector that the Baofengs uses.

These cables are simple, and they work, but they may cause damage to either your PC or radio if used incorrectly. Much like a can of Coke.

UPDATED WITH DIAGRAMS FOR THE MENTALISTS

IMPORTANT NOTE: Do this at your own risk! You may damage your radio or PC using these shitty half arsed cables!

So, now that warning is out of the way… 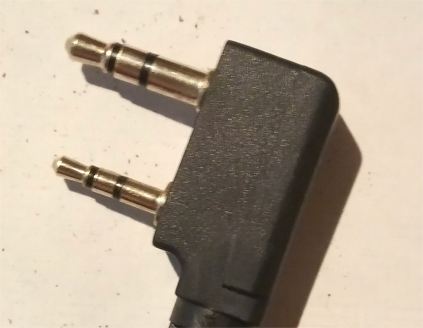 And electrically, it does this:

Well, that is for the speaker/mike combo.  So… how do we connect it to the Speaker and Mic jacks on a PC?

Well, there are various options, and I’ll go through them in turn.

First we need some connectors. Namely a a Kenwood sytem 35./2.5mm TRS connector, two 3.5mm TRS jacks, and a USB sound adaptor (I’d rather fry one of those than my maptop sound card). 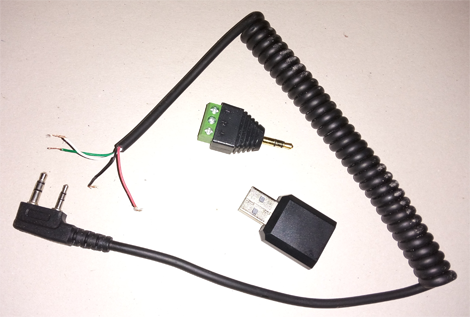 Yeah, that is the lead from a fake Baofeng Fist Speaker/Mike, which came pre-broken with a missing PTT switch assembly. (Search on Wish.com, but don’t pay more that £2.00) And, yeah there is only one 2.5 TRS jack with screw attachments. I think the cat took the other one.

A real Baofeng on looks like this, and works, but is very muffled. 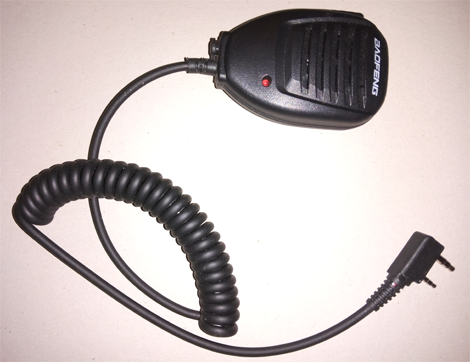 Now, as you see from above, the Baofeng cable (yes Tony, stop calling it a Kenwood one, before you get shot) has four wires in it, Red, Black, Green and White. A small amount of time with a test meter gives us the connections (if you are doing this, please double check, as the colours could change!) which were checked against the diagram above:

Note the Black lead only gets tied to Ground when the PTT switch is used. Maybe more on this later.

So… some cables… So again that warning…

IMPORTANT NOTE: Do this at your own risk! You may damage your radio or PC using these shitty half arsed cables! 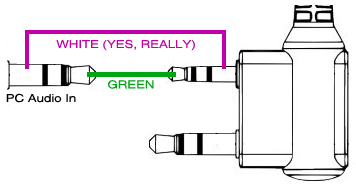 Obviously, you can’t draw a White cablite on a white background, so I used purple. Why not?

This is a nasty nasty cable, and offers no protection between the radio and the PC. You control the input level to the PC by using the volume knob on the radio.  To test the levels, you are probably best off setting the squelch to ZERO on the Baofeng, plugging it all in, switching the radio on with the volume at its lowest setting, and the increasing if slowly, while watching the input levels on something like Audacity. Then marking it with something like Tippex.

I know it works with SSTV and APRS (keep the squelch all the way off for APRS!).

Quick and simple to make, just using the bits from before.

This time be are connecting the Ground of the Audio out on the Soundcard (Sleeve) to the Ground from the 2.5mm Sleeve (White), and the Left Channel out from the Soundcard (Tip) the Microphone+ (Red) 3.5mm Ring on the radio. We are not using PTT (Push-To-Talk on this, as we are just keeping things simple (and crap). 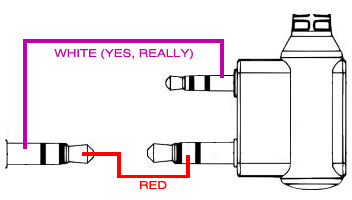 If you’re using the same screw-terminal 3.5mm jack as I am, then its just a case of taking the Green wire out, screwing the Red wire in, moving it to the speaker port, and doing some configuration of the radio and software that you are using to transmit.

You’ll have to mess with the VOX setting on the radio and the output settings on your soundcard.

This will go wrong a lot, so I swapped my antenna out for a Dummy Load that knew could still be recieved in the next room.

Even at VOX7 it kept transmitting randomly, so a cable like this shouldn’t be used. Ever.

I did, however,  manage transmit an SSTV across to the receiver. So all was not lost with this experiment.

Now, if you are utterly mad, don’t care about your equipment, about other people and just want a quick cable to piss about with…. 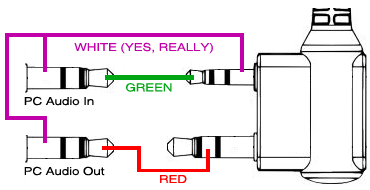 Yes, it works. Yes, it is horrible, Yes you’ll have to manage the PTT yourself. Yes, I’m going to make a better cable soon.

One thought on “Simple PC to Baofeng Audio Cables”