So, its Rock Festival season again, and because I’m too useless to own a functioning vehicle and as my Rock-Buddy doesn’t want her precious 3 Series bogged axle deep in a morass of mud, piss and stale Tuborg, its time to hire a car.

After last year’s awful Chevrolet Spark Clown Car, we felt it was time to upgrade to the second cheapest option. A Ford Focus, or a Vauxhall Astra. I think its obvious which one we got.

So, courtesy of the nice people at Enterprise, we got a Vauxhall Astra 2.0 CDTI SE in, what I think is called, “Ubiquitous Silver”. Really, I’ve seen loads of these on the road, and most are in the same shade of silver that my Dad had our Granada estate re-sprayed to in 1980. Then, it was about it being a nice colour, now its all about silver cars having a higher re-sale value.

From the front, it really is quite a nice looking car. 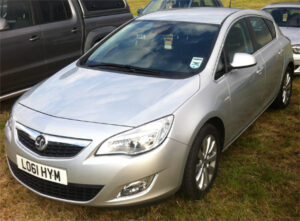 The arse end, however, is goppingly awful. 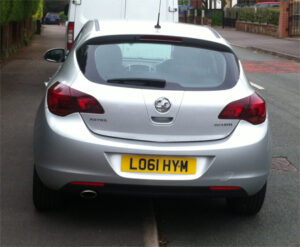 This has to be the worst arse-end of an Astra since, erm, ever. Even the proto-Astra, the Chevette, had a better back end. And just look at the shape of the cabin. What is it about cars these days and making the roof three feet narrower than the doors? For normal people this probably isn’t a problem, but at 6’5″ there is no way I could sit comfortably in the back.

It is, however, possible for a normal sized person to do a complete clothing change in the back, without opening the doors or booting the driver in the back of the head while he is trying to negotiate the Old Knotty Way bypass around Uttoxeter.

Driving wise, the six speed box on the diesel version is quite nice, and it has enough umph to get off the A50 Uttoxetter roundabout without having to worry about being killed to death by a Stobart. We didn’t speed test it, but it will happily do the legal speed limit +10mph +10% in fourth, never mind sixth.

It does have a few features that I’m not a fan of. Eco Stop-Start annoys me, and on the Astra it seems to be a bit brain dead. Once, while parked, it started up when I nudged the wheel, and another time it started up while we were out of the car and leaning on it. You can turn it off, but it doesn’t stay off for long.

The push-button handbrake was similarly confusing until we decided to just ignore it. It does it’s job when needed, but you can’t pull a J-turn in Tesco’s car park with it. Not that we tried.

Is it nice to drive? Yes. So much so that once she got her hands on it, I wasn’t allowed to drive it again.

Would I buy one? No. But if I had the money, I’d go for the Estate version (which doesn’t have such a hideous arse-end).