Some years ago, I decided that I wasn’t completely happy with having to carry printed timetables, or having to scroll though big PDF files while chasing Trams on my visits to the Blackpool Tramway.

I figured that it would be better to be able to access the timetables on my phone. As I was incapable of creating Apps for both the Android and iPhone platforms (seriously, have you seen what you have to do to become a developer for iOS?), I decided to do it as a mobile-friendly formatted web page. How hard could it be?

Well, to be honest, I’ve got form in the Timetable business.  I worked for Teleride UK/IRD Teleride/TTI Teleride, back in the late ’90s thru to 2001. We did Bus timetable type stuff. But we never did internet timetables. Mainly because the management didn’t think that online timetables would ever be a good idea (yeah, like that was a good decision!).

Anyway, a few decades later I decided to make the system that I could have done way back when.

The coding on this took about two weeks originally, at about three hours a night, with the database design evolving each day. Still the database evolves as I add new ideas, and the code evolves along with it.

So, does this thing contain any proprietory code owned by Teleride UK/IRD Teleride/TTI Teleride? No. anything I wrote for them was in Visual Basic 3 (I’m not kidding!), 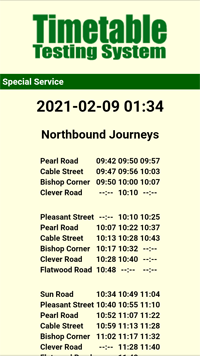 This thingummy is now available at ttttt.org.uk. It will constantly evolve with new features, as and when I get round to them.

I have to thank the nice people at Blackpool Heritage Tram Tours for providing me with testing data over the last few years.

I understand that they are now going to integrate their Heritage timetable into their regular running timetable on their App, making this little project obsolete for them. I count this as a victory, as it means that at least somewhere people can see the old tram schedules online!

Once the world gets back to normal, I’ll continue to add the BHTT timetables, along with any other Heritage operator (train or tram) who will provide me with timetable data.

And if any commercial operation wants to pay me to use this, then I am open to offers.