In the beginning the was Bellisario and the Void. And Bellisario looked upon the Void and the darkness and proclaimed “Let there be JAG”, and thus there was JAG.

But JAG could not exist within the Void alone, and thus “First Monday” (2002) was called into being. The JAGverse was born.

First Monday incorporated the character of Edward Sheffield, played by Dean Stockwell. He would later appear in NCIS too. 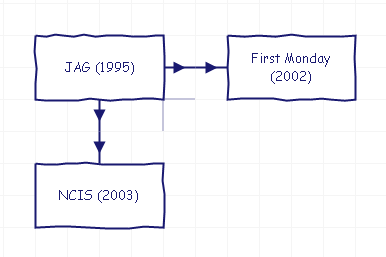 JAG ended in 2005, but the ‘verse continued on thanks to NCIS.

In 2008, the NCIS episodes “Legend (Part 1)” and “Legend (Part 2)” formed a Back-Door Pilot for a new series: “NCIS: Los Angeles”.
NCIS:LA characters have appeared in the now main NCIS series since then. 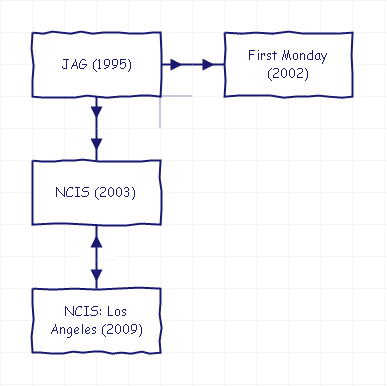 In 2011 Kensi Blye from NCIS:LA appeared in the Hawaii Five-0 episode “Ka Hakaka Maika’i”.  And them in 2012, G. and Sam appeared too. The walls of the ‘verse had been broken, as this was the first time that a series not created by Bellasario had been linked in. 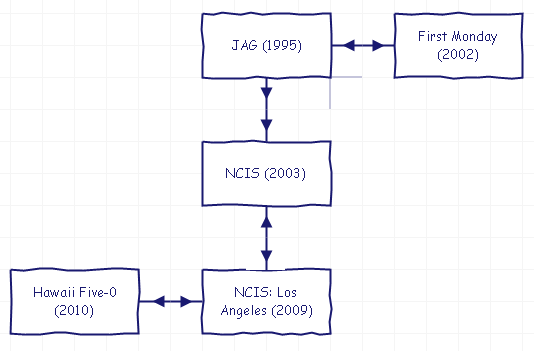 Of course we now have to consider the original Hawaii Five-O and it’s place in the ‘verse! 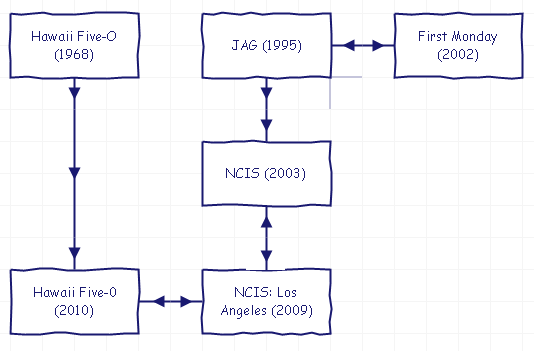 (I’m counting a charater continuing from the original to the reboot, as the badly CGI’d ghost of Jack Lord’s portrayal of of Steve McGarrett appeared in the new H50, for no good reason).

And then, in 2014, NCIS did make another Back-door Pilot, in the form of the episodes “Crescent City (Parts 1 & 2)”, and this did spawn NCIS: New Orleans. And there would be crossovers later, 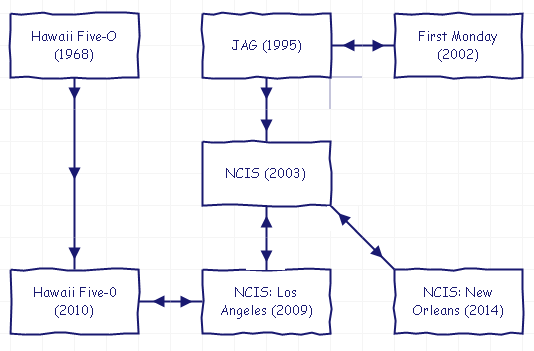 In 2014, Hetty Lange was in contact with the Scorpion team. 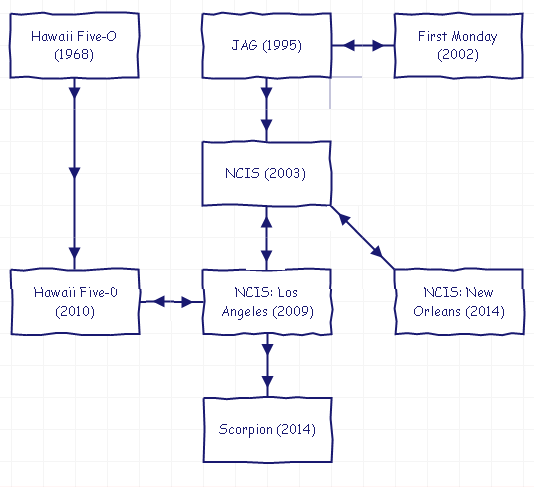 And this really was a shame, as Scorpion was, quite frankly, a massive pile of shite. I can’t express how much I hated the concept of the show, the man it was supposed to be based on, and how much full of shit it was. Even the styling of the opening card was wrong! I mean, </SCORPION> is XML for “end of Scorpion”. Maybe that was a subliminal message all along. 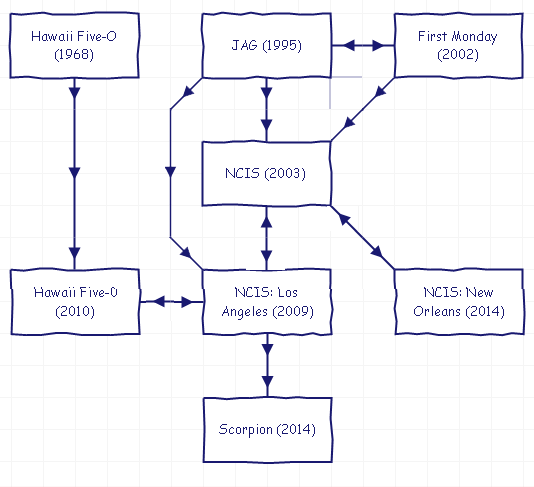 I took the opportunity to fix the First Monday/NCIS directe link there too.

First there was the one- way job, with Chin Ho Kelly, Kono Kalakaua, Jerry Ortega and Kamekona Tupuola appearing in MacGyver (2016), which of course was a re-boot of MacGyver (1985). 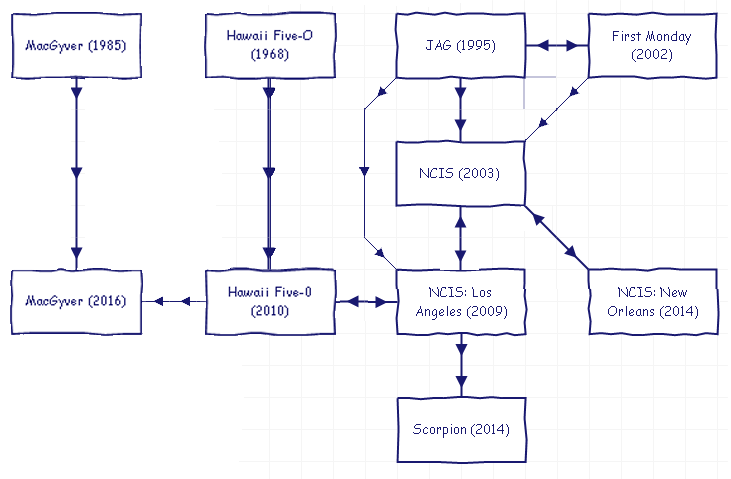 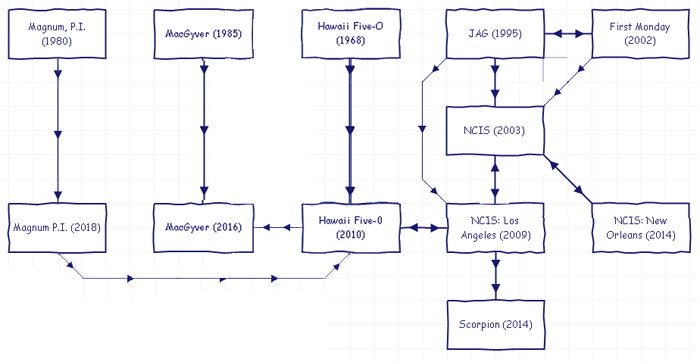 This is getting unwieldy, so for now we’ll just concentrate on what I’m going to call “The Magnum Nexus”.

Back in the day, Magnum (1980) had crossover episodes with Simon and Simon (1981): A.J. and Rick Simon from Simon & Simon appear in the Magnum, P.I. episode “Ki’is Don’t Lie”, while Thomas Magnum and Johnathan Higgins appear in the Simon & Simon episode “Emerald’s Are Not a Girl’s Best Friend”. 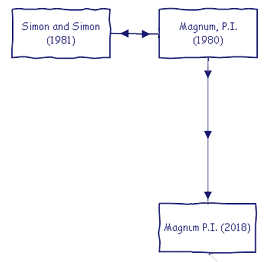 And then in 1983, Simon and Simon crossed over with Whiz Kids: A.J. Simon appears in the Whiz Kids episode “Deadly Access”, while several Whiz Kids characters appear in the Simon & Simon episode “Fly The Alibi Skies”. 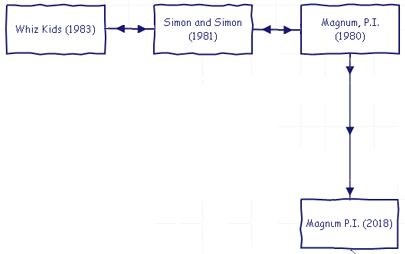 “Hey, there’s a lot a blank space there,” I might hear if anyone actually read this, “I hope you are going to fill it!” 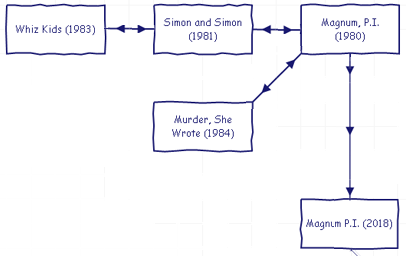 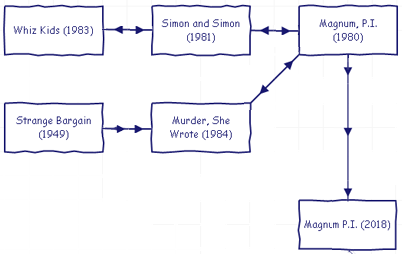 Murder, She Wrote had a spin-off series called The Law & Harry McGraw (1987). 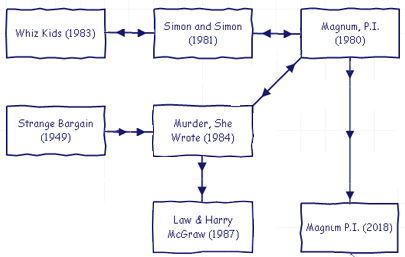 Now, back on the overview, we are now in “click on the image to embiggen it” territory:

So, are we finally done? Well, yes and no. In 2018, Mike Wolfe from American Pickers appeared as himself on NCIS, and as far back as 2013, Duane “Dog” Chapman and his crew had appeared in Hawaii Five-0. Reality TV is not a rabbit hole to go down, so initially I decided against including them. But then I thought “what about fiction programmes that they appear in as versions of themselves?”

Well, Dog has appeared as himself in the following fictions:

With such a convoluted and complex cross-over realm, there are a lot of anomolies. Many actors have appeared in different roles across the series over the years. The most obvious ones being Sean Murray, Terry O’Quinn, Dean Stockwell and Scottie Thompson (all having played main/recurring characters in one series and guests in another).

Then you have the paradoxes, like the appearences of “Genuine Magnum P.I.” shirts in NCIS.

This whole project of mine has just been a bit of fun for me, to relieve the boredom of my lockdown life. It did make me think, though. How large could the JAGverse be? Imagine if it crossed over with the CSI ‘verse? The “Chicago” ‘verse?

It also made me think about the character of Dwayne Pryde.  Is Dwayne constantly suffering because he can’t find the solution to complete his current leap?

Still, that would be better than the time he got stuck on a spaceship for four years before having his run effectively annulled by a fat man with a beard declaring it a holodeck simulation.

So, we have a continuity that effectively runs from 1949 to the present day. I keep watching and looking out for more cross-overs, but for now I think the well is dry.

Now we have NCIS: Hawai’i, which is not a direct spin-off from any existing series, having not been a sneaky mid-series pilot. Thus, for now it sits alone in the ‘verse.

Filmed utilizing the old production facilities of the defunct Hawaii Five-0, and set on Hawai’i, it surely can’t be long before there is a cross-over with the Magnum P.I. (2018) series, or the appearance of characters from Hawaii Five-0 itself. But for now, it floats alone:

LATEST: In March 2022, NCIS and NCIS: Hawai’i finally did a crossover!

I will make a prettier version of the map eventually.

Note: This was sketched out using Trizbort, a tool for mapping interactive fiction games, and further widdled with in Photoshop.