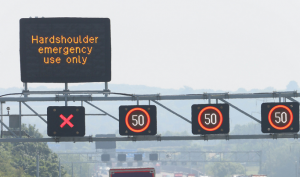 The problem with this 4 lane running smart motorway guff is that its fine until someone breaks down.

Normally with 3 lanes and a hard shoulder this isn’t too much of a hassle, but with 4 lanes it means that you suddenly lose a 1/4 of the capacity for a short distance causing an instant bottleneck. Sounds brilliant so far. An utter blinder of a plan.

Now imagine this scenario: Poor little old Mrs Thingy in her aged Micra breaks down and gets as far left as she can. The fat controller in the watch-box is busy scratching his knackers and doesn’t spot this hazard immediately. An over-hours HGV driver, distracted by an overdose of Redbull and barnyard pornography also fails to spot the hapless lady in time. Thus her small car is briefly turned into a a metal and flesh death-ball, punted down the carriageway at speeds it has previously never reached. Itchy balls + Redbull + beastiality = dead pensioner.

Not seen the video of the truck belting down the motorway with a Clio stuck to its front bumper?