The pilot episode of “Going Straight” (sequel to “Porridge“) was the  show that started me off on finding errors in TV shows when it came to their depiction of railways and trains, and Stafford.

According to Wikipedia, the plot of this episode is: “Fletch, having been paroled, makes his way home from prison. On the train, he bumps into Mr Mackay and an old friend.”

This is going to be a brief one, as I have no intention of identifying the coaches used, just highlighting errors.

I apologise in advance for the blurry nature of these screen-grabs. Things weren’t exactly HD back in 1978. 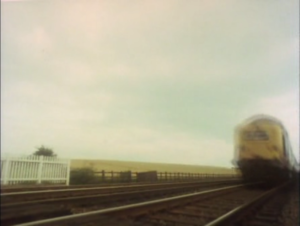 Yes, the blurry yet unmistakeable front end of a BR Class 55 Deltic, undisputed Kings of the East Coast Main Line in the late ’70s. Here we have the slight problem that anyone travelling from the fictional Slade Prison in Cumbria to London would be on the West Coast Main Line, which at the time used different locos. 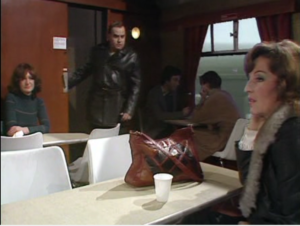 Ok, so I said I wasn’t going to start carriage spotting. I lied. Anyway, those seats look like school chairs, and the camera position would be about a foot outside the the carriage. Otherwise it doesn’t look too bad. It is a bit short though, and the windows are too far apart. 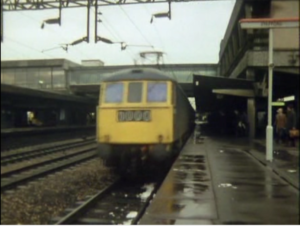 Indeed it is! And it looks as grotty today as it did then. Thirty years, and the main change is that those signs have been replaced. Multi-million pound refurbishment my arse!

As far as I can make out, the loco is BR Class 86 86221 , but someone will point out my error if I’m wrong. Clearly not a Deltic though, and certainly WCML not ECML!

Hold your horses! A tunnel? At Stafford Station? Such a thing has never existed! The main reason for this is that the station lies too close to the flood level that about 10 minutes of rain will bring.  On a good day, the park (opposite the station) becomes a boating lake (important note: do not take an inflatable dinghy out on the flooded park – the police will get involved and it will not end well).

And the Manchester Evening News advert? Not ’round here mate. 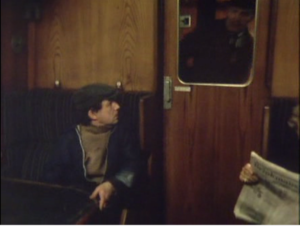 Filmed on filmstock, not the video tape used for the fake carriage above. 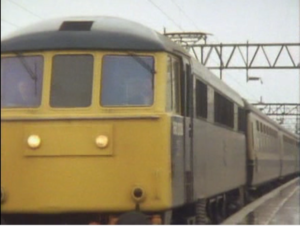 Anyway, the mismatched locos weren’t the point of this. The point is, Stafford Station doesn’t have a tunnel, didn’t have one in the ’70s, and TV producers still don’t pay enough attention to detail.