The Stafford–Shrewsbury line formerly ran between Shrewsbury and Stafford, from 1849 to 1966.

Those paying attention will spot that the little thing above only shows Wellington to Stafford… and for good reason – the line between Shrewsbury and Wellington is still in use, and here I’m only interested in the closed parts.

A now deceased associate once told me that the Stafford to Donnington section was lifted over the course of a month, and that the sleepers had to be destroyed and the rail taken away as fast as possible, in case somebody changed their mind.

The last stretch of Wellington to Donnington track was lifted in 1991.

It took a while to get going (not the Century!), but between 2008 and 2009, a single track line was rebuilt between the junction at Wellington and the new Telford International Railfreight Park, built at Donnington (like you really didn’t see that coming!)

Also in 2009, the Association of Train Operating Companies proposed the reopening of the Stafford=Shrewsbury line as part of their £500m plan to try to undo some of the Beeching Axe choppings.

In March 2011, a group called the Shropshire, Telford and the Marches Strategic Rail Group lobbied to re-open the line, and rebuild some of the intermediate stations.

In January 2019, Campaign for Better Transport released a report identifying the line which was listed as Priority 2 for reopening. Priority 2 is for those lines which require further development or a change in circumstances (such as housing developments).

In January 2020 the UK Government announced a £500m fund to support the reopening of disused stations and lines closed under the Beeching cuts. The Shropshire, Telford and the Marches Strategic Rail Group and Wrekin MP Mark Pritchard called for the reopening of the Stafford-Shrewsbury Line to reconnect Donnington and Newport.

All of this is, of course, just pointless. Nobody ever considered the possibility of the line reopening, so it was never protected.

Because there is no joined up thinking between agencies in this country, you have the absolute farce of one lot saying “yeah, that would be a goof line to re-open”, while others are frantically building houses and roads in the way, seemingly deliberately.

Starting over on the eastern end of the route, the A518 New Trench Road from Garrison Roundabout to near Honnington lies smack on the route. The was built in the ’90s, so you can’t be too hard on them.

When you get into the southern parts of Newport (Church Aston), you have a strange arrangement of bridges over nothing, and the line of the route going through gardens, such as those on Wallshead Way and Station Court. And there are a few Industrial units in the way. Next comes a huge hurdle

From the A41 crossing all the way to just before Stafford, the route is now a cycle trail. Any attepmpt to claw it back would be met by an army of lycra-clad shitehawks banging on about losing their rights. Cyclists are worse than Ramblers, and Ramblers are pretty fucking annoying.

And then at the end of the psychopath-path we hit another 2010’s build housing estate, built *AFTER* the first re-opening proposal: 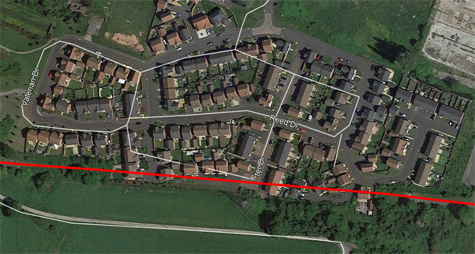 And, next, oh so very close to the main line connection at Stafford, we have the final obstacle… There used to be a siding that ran up the back of this factory: 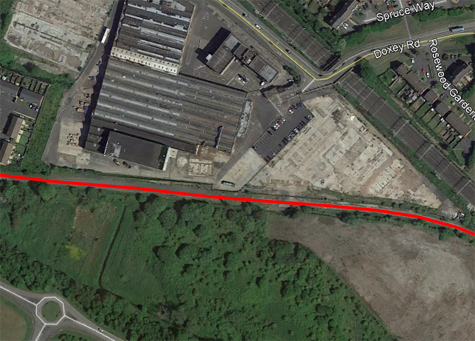 But that factory isn’t there anymore, and if you can’t see what is coming up between the roads at the north edge and the rundabout in the southeast, then you are thicker than all the residents of this housing estate put together: 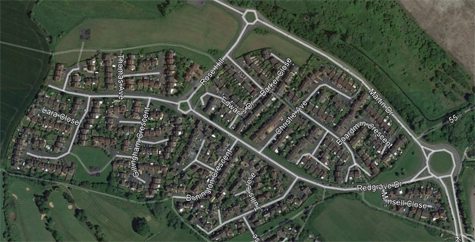 For these people are now wanting compensation for the increased traffic on their access road (which was in the planning stages before the first house was sold). They’ll utterly lose it when they find about the plans for the other 4,500 houses that are going to get builton the back of that estate! 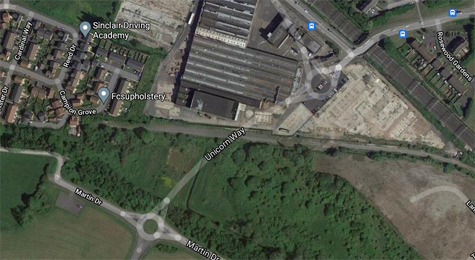 But that’s ok, cos surely the line will be crossed by an overbridge? 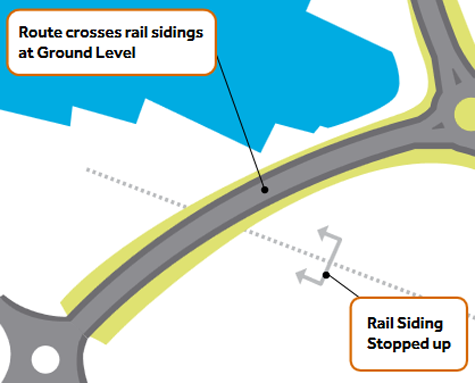 Well. that has fucked that, hasn’t it?

Yes, for some reason connected with either cost-cutting, back-handers or just plain half-arsery, the new road cuts across the new line, not at “ground level”, but at such a height that either a level crossing or a “dive-under” would present gradients too steep to be usable. Brilliant thinking, and a proper kibosh for the line.

So I suppose that’s it for this rant? Well, actually. no.This part of Stafford contains one of my favourite little historical oddies. This bridge:

The bridge was originally built to carry the Doxey road over the Stafford to Uttoxeter Railway, but today it stands alone, redundant and useless.

I bet it “accidentally” gets knocked down while the road construction is going on.