The year was 1996. I was a humble software technician at a newly Universitified Polytechnic in Staffordshire. Basically that meant that I reinstalled software every time the students mucked it up, which was daily.

When I wasn’t doing that, I’d be hiding at whichever of my three desks I was least likely to be found at and forced to do some work. Mainly playing Transport Tycoon and reading the Usenet Groups.

One of those groups was comp.sys.sinclair, which specialised in all things related tp the computers made by Sinclair Research Ltd. The ZX80, ZX81, the Spectrums and the QL.

That was the year that they started the annual Comp.Sys.Sinclair Crap Games Competition (CSSCGC). I wrote a crap game and entered it.

The game was SpecDaleks. A port of the old Unix Daleks game to the Spectrum, and it looked like this: 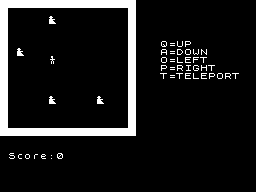 Truly, it was awful, but that was the point. To make the worst game possible. But I failed even at that! I only managed to finish third!

Still for one year, I was officially the third worst writer of Sinclair ZX Spectrum games. That is something that I am immensely proud of to this day.

If you have a suitable Spectrum emaulator, you can download a copy of the .SNA file here.