So now I’ve bought the Camera Module for the Raspberry Pi. I got mine from Amazon, mainly as I was putting in a big order and was drunk enough to tag it on to the end.

Getting the damn thing set up and streaming video through a web page was a Pain In The Arse,

The only resource I could find that worked was Miguel Grinberg’s guide, but I still had problems with that. I suggest that you read his site, as it contains a lot more information. My version, below, is a quick run through, more for me to refer back to than anything else.

1. Build and Install the software

Run the following as root:

2. Start the Camera and Streamer

Starting “raspistill” as suggested in Miguel’s guide dumped a lot of text to my xterm, making things really annoying, so I installed “screen” and ran the Camera software and the streamer in a different “screen”, which would also keep running after I logged off the machine (follow the oncreen prompts when you see them):

Dropping out of “screen” ( CRTL-A CTRL-D ) and back to a command prompt, and its all done.

Fire up your favourite Browser (which I hope is Firefox) and access the site generate by th Pi. As the eventual goal of this whole thing a Wifi controlled toy Dalek drone, the hostname is “dalek”. Thus, on my network the address is:

You’ll have to substitute dalek for either the name of the machine on your network, or the IP address, eg:

You should be getting a web page with instructions on how it all works.

To grab a single from the camera:

There other things you can play with, but those two are the only ones relevant to my little project.

Finally, an example of a still picture from the camera: 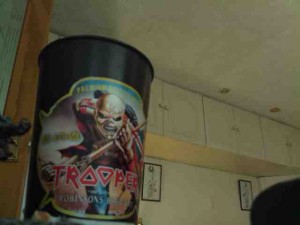 (Once again, full credit to Miguel Grinberg and his excellent guide.)