Back in 1987,  Chris Boucher created the TV series Star Cops, and accidentally foretold everything about your daily life.

Back in those days, affordable personal computers were crap. It was the end of the 8-bit era, and the dawn of the PC age for the masses. Amstrad were knocking out cut-price but frankly rubbish desktop PCs, but most home users still had old Spectrums and Commodores, with a few having Ataris.

In the “portable” world, we had some very iffy luggable laptops, and the Psion Organiser.

The Psion was utterly brilliant for the time, and the price, but looking back, it was actually very limited. Still, it sowed the seed for something a lot better.

The Psion Organiser inspired the “Box”, which would be made by the fictional Recondite Computers.

Having roughly the same form factor as the Psion Organiser II, Box was a (large) pocket-sized communication device with Artificial Intelligence, voice recognition and wireless network connectivity. Does that remind you of anything? 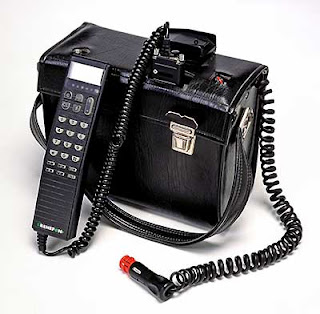 1987.  It would take nearly 10 years before “Personal Digital Assistants” (PDAs) started to appear. Read about it here, PDAs and phones crossed over and then became the same thing, but it wasn’t until 2011 that natural language voice recognition came to the  mobile phone, with the voice (and ears) of Siri.

And after Siri came Cortana, Alexa,  “ok google”, and the age of your digital devices listening to you all the time.

Of course any Recondite Computers, or Recondite Systems, that have a website right now are also entirely fictional and should be considered as fan sites.