So, what tat have I bought while drunk now? 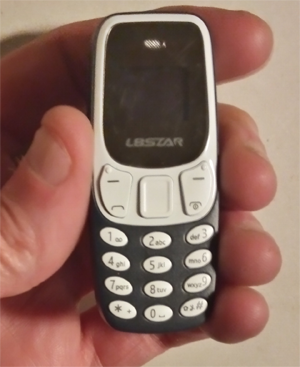 Bearing in mind that I hands the size of plates, I think a better scale photo is in order…

So, shorter than a clipper lighter and a Tippex bottle. In real numbers, the largest dimensions are 68x13x27mm, as measured by a plate-fisted idiot. Anyway, this thing is TINY.

What do you get in the box?

Well, you get the phone, a microUSB charging cable, and the battery (inside the phone). No manual. I’ll get to that later.

What slots does it have?

Externally, a microUSB charging hole on the top.

Internally, 2 nanoSIMs and 1 microSD. Annoyingly, with an SD card in, you can’t use it as an external drive on a PC. And no, it doesn’t have a headset jack.

Is it of any use?

Firstly in Headset/BlueTooth Dialer mode I have the thing connected to my Nokia 2.3, and can have it sitting in my shirt pocket to make/receive calls while the Nokia is plugged into the charger (which it is most of the time these days, as it provides Internet to the home office set up). It weighs almost nothing.

Secondly, with one (or two) 2G Nano sim(s) in it, it works fine. I’m using a Vodaphone one at the moment, in the first slot.

Who is this phone aimed at?

Well, maybe I’m being cynical, but such a tiny phone has a limit appeal. Its no use for hobbits, as they have fat fingers. I suppose a pixie or sprite could use it to do an hilarious Dom Joly/Trigger Happy TV thing. And people like me will buy it because its a cool little toy, and I’m a massive overgrown 11 year old.

Which comes down to how I found out about this phone. My hilariously pixie-sized girlfriend was telling me about the things that people try to smuggle into her secure workplace. I can’t really state where she works, but let us just say that the “Investor in People” sign outside really means that they are stockpiling wronguns and that the day that Rolf Harris was let out, she polished the brass plaque outside every hour, and thence appeared on the news on every UK TV channel. You understand where I mean?

So it is  a ‘phone you can hide up your arse in prison, smuggle into prison in a Mars Bar, or maybe throw into a ditch when the rozzers come chasing after you for selling drugs in the alleyway behind the big flats.

Also, as it is one of the cheapest phones you can buy, maybe you just want a stand-by phone for emergencies? As you can charge it from any old microUSB cable, its an ideal tiny thing to add to your emergency kit.

I keep mine charged up anyway, along with the cable, because of my declining health, and me constantly running my smartphone battery down.